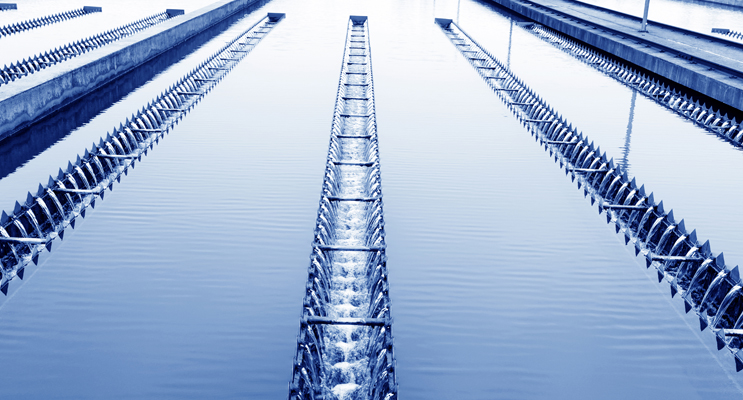 Black & Veatch’s annual Strategic Directions report reveals the momentum for water reuse in the U.S., citing reasons for uptake as well as remaining barriers to entry.

Faced with the specter of climate change and all its devastating impacts — from increasingly extreme storms to longer and more significant droughts — it’s no longer sustainable to rely on discovering new water resources. Much of the world’s population faces an uncertain water future, making it more imperative than ever that we adopt smart strategies to reuse what we already have.

An expanding portfolio of water reuse strategies is giving water utilities more options when it comes to meeting the needs of growing populations in water-sensitive areas. 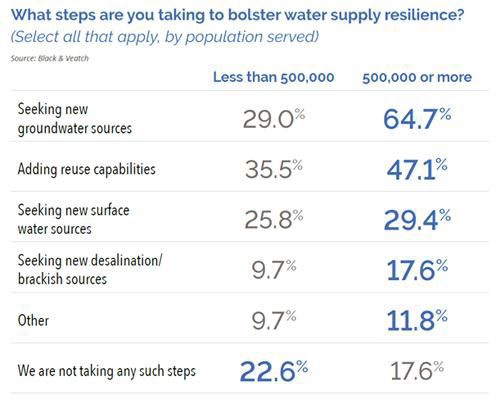 This represents a step change, as 65 percent of respondents indicated they are exploring water reuse implementation options more deeply today versus five years ago. When it comes to water resilience, reuse capabilities are the strategy most widely used by smaller utilities. For larger utilities — those serving populations of at least 500,000 — reuse ranks as the No. 2 strategy behind seeking new groundwater sources.

Water reuse means adopting a “circular economy” approach. Two-thirds of survey respondents indicated they are familiar with the core principles of the circular economy. Incorporating these principles into water management and reuse strategies requires analyzing the method that works best based on region and size, bringing the public on board, and finding creative ways to pay for it.

Groundwater recharge is a means of potable reuse by way of groundwater injection or infiltration to “bank water” for future use. It is widely used in the arid Western United States. A regional breakdown of the survey showed respondents from Western states indicated groundwater recharge was a primary strategy in their water recycling portfolio.

In the South — between New Mexico and Virginia — where the largest portion of utilities by region had yet to adopt water reuse strategies, the most popular adopted or supported strategy is potable reuse, including surface water augmentation and groundwater recharge.

A regional breakdown of water reuse strategies reveals, especially for larger and more mature institutions, that these utilities are implementing more than one water reuse strategy. While more than 40 percent of respondents chose risk mitigation, resilience, and/or water scarcity as their main reason for water reuse, effluent disposal is also a factor in water recycling strategies. Twenty-eight percent of respondents cited effluent disposal as their main reason for a reuse program.

In the 1960s, Florida began recycling water as a way of mitigating effluent disposal, implementing water reclamation efforts to divert treated effluent for Tallahassee agriculture. By the 1970s, this broadened into reclaiming water for landscape irrigation.

Today, the vast majority of Florida counties continue to reclaim their wastewater. Florida citizens reuse wastewater to irrigate their private and public lawns, and roughly 820 million gallons of reclaimed water were used for public benefit purposes in 2019. As groundwater supplies dwindle, Florida is considering expanding into potable reuse strategies, according to the Florida Potable Reuse Commission’s new strategic plan.

Getting The Public On Board

As the University of California-Davis Policy Institute for Energy, Environment and the Economy reported, California lawmakers looking to meet state requirements for an increase of one million acre-feet of reused water per year by 2020 and two million by 2030 have mandated that treated wastewater be recycled for drinking by 2023.

In 2008, however, the Orange County Water District of California, in partnership with the Orange County Sanitation District, began a successful groundwater replenishment system treating 100 million gallons per day of wastewater and replenishing local drinking water aquifers. Bolstered by a decade of public education, engagement, and smart engineering, and building on expertise in water recycling going back to the Water Factory 21 project, the district found media coverage positive and public support widespread.

The final expansion of that system is in construction, taking the total capacity from 100 million to 130 million gallons per day. The system has recycled more than 314 billion gallons since inception, and on its 10th anniversary set a Guinness World Record for the most wastewater recycled to drinking water in 24 hours.

Survey respondents indicated the biggest barrier to more reuse is cost. In a survey question asking respondents to select up to three barriers to doing more reuse, costs to build and execute were the biggest obstacle. Lack of public acceptance was still significant but less than half that of the barrier of costs. Revenue from reused water systems was also considered a barrier, ranking as the third-most significant barrier to implementing reuse strategies.

Cost was an even greater factor for utilities serving fewer than 500,000 customers. Lack of public acceptance was almost twice as likely to be selected by larger utilities than smaller ones. Both groups similarly selected insufficient revenue from reused water systems to justify the programs. Investment in water reuse can, however, offset other water utility costs when approached in a holistic framework.

In February 2020, the U.S. EPA released the new National Water Reuse Action Plan. Focused on water reuse as “a valuable, perhaps necessary component of integrated water resources on planning to ensure safe and reliable sources of water at the federal, state and local levels well into the future,” the report includes a compilation of federal funding sources.

Searching for new resources, aggressively asking potential partners for help, plus positioning for grant funding and stimulus money for shovel-ready projects are smart strategies for utilities looking to invest in water reclamation projects.

Black & Veatch’s survey results reveal an increasingly positive outlook for water reclamation as a real solution for overall resilience efforts. Reuse is a wise water utility strategy in a world increasingly adopting a circular economy framework as the answer for future sustainability and resilience.